Now that the chickens are big enough we have been letting them roam in the backyard. Our two big dogs have gotten used to them and we have minimal issues with having them all out together. Here are some pics of our flock. Looking forward to next month as we should be expecting our first eggs in June.

Duckie is the white pekin duck, she is the flock mother she even lets the dogs know who's boss. Duckie is a bit confused though, as she thinks she is a rooster. In the early morning (5am) Duckie has been waiting at the steps leading into the chicken coop and quack-a-doodle-doing at her chicken friends to wake up!  Since the two ducks sleep in a dog house in the same pen, we have placed a piece of plywood in front of the door to the dog house and lock the ducks in at night, This has been very effective at fooling them to believe that it is darker out and she has not quack-a-doodle-doo'd except every once in a while. The chickens, however are smaller and have been found squeezing into the dog house to snuggle with Duckie and Sweedie (the black duck) in the am. They are a riot! 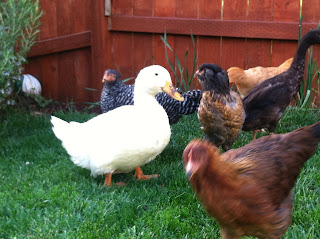 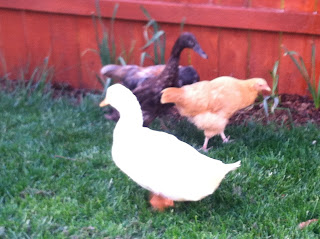 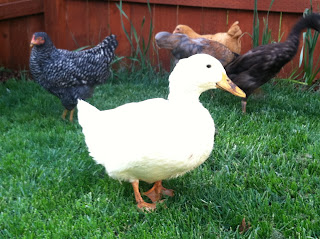